Showing posts from 2011
Show all

Surgery no help for stroke prevention

Hoodia goes down the drain

Dentists: Let them have candy

Coffee; the truth in a cup

Vaccine Wars; Younger doctor’s against them

Your hairdresser really knows for sure

October 14, 2011
Take a week 2 picture of your Fast Food and post it in your blog if you can. Write a post describing any changes in appearance or smell.

As that pondering question remains on McDonalds hamburger after two weeks it still remains looking the same as the first time you buy it. As far as smell goes there is not really one. You would expect food to go spoil and just smell nasty but there is no smell. This kind of makes you think twice about eating a hamburger.
Post a Comment
Read more 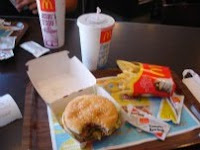 For those of you who don't know I am going to Southwest Institute of Healing Arts to become an Alternative Medicine Practitioner. In Nutritional Therapies the following question was posed:
Purchase a Hamburger or Cheese Burger from your choice of fast food restaurant and take a picture of it to post in your blog. Comment on what changes you would expect to see a burger without any preservatives or chemicals look like in 28 Days.

My theory With the high amounts of fats and chemicals in it would preserve it if you did not place it in glass or plastic containers which would then create moisture.
Without chemicals and preservatives I venture to gather it would turn to mush and not smell very good.
This of course prompted me to see why McDonald's burgers do not go bad after reading this it explains why I don't go to McDonald's

Spicing your way through disease

Is giving your kids yogurt worth it?

Antibiotic for OCD in children

Men are the weaker sex

Coffee the Slasher of Depression

September 22, 2011
Not very often do I get soap box and preach nor do I want too. However, this time is a little a different. As you know I write news on Detroit Examiner. Searching for this mornings news not only I find it but what I had found had turned this bright sunny day into a dark one.

Jamey Rodemeyer made today’s top news headlines. Jamey had made the news not for a crime that he had committed but for a crime that was committed against him which had led to this young man’s soul being gone at the young age of just fourteen. Jamey. Jamey just like any other teen had his social networks, friends and just your normal teen. Did I mention Jamey was gay? Due to his sexual orientation he had endured years of torment and teasing, in one word bullying.

Back in May of this year he had made an up beat and encouraging video “It Gets Better”, unfortunately it did not get better for Jamey or others who had lost their young lives to bullying.

Fall the most beautiful season for fitness

9/11 Memories linger so do the health effects

Evidence of Chondrotin Sulfate shifts in favor of supplement

Safety of Osteoporosis Drugs in question

What dangers lurk from your treadmill?

Coffee the protection for Skin Cancer

Dangers of backpacks just around the corner

Is the President aging before his time?

Exercise most powerful for Cancer Survivors

Your own placenta in a capsule Say What?

Hypnotherapy a valuable aide for surgery